Been a long time since I posted anything. Poor blog, I treat it like Livia treated Julia. But now there's a reason. 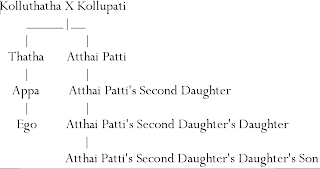 I just got re-Iyerised. Yesterday was the Poonal ceremony of my father's father's sister's second daughter's daughter's son. See attached genealogy to resolve confusion, but that demonstrates that family bonds run strong. An Englishman would say "second cousing once removed", but that doesn't sufficiently demonstrate the exact relationship.

Anyway, I went to his poonal, and there was all the smoke and Sanskrit to be had. Very Iyerish, very reassuring that the caste traditions were still alive. Especially the Brahmopedasam, when a cloth is placed over father, son and holy priest, and at the end of which the boy emerges a Brahmin. That's also the signal that food can be consumed.

Food is of course what a Brahmin exists for. I had woken up at 5 to attend this, and it was 9 now. So I had what I called "Brahmin hunger', the all-devouring vegetarian hunger that only a Brahmin can have. Proceed to breakfast table and capture a banana leaf.

The caterer was our ever-dependable Ronak Caterers, (known in Bombay Iyer circles as Raja), which meant the food was good. It was. Which is why I don't mind advertising him here.

There was coconut chutney (which must come first, me being a Nellai Iyer), onion chutney, sambar, crisp vadai, somewhat-crisp dosai, masaladosai masala, and, most copious and delicious of all, venpongal. Only after consuming generous quantities, and bidding bye to my weight-loss efforts, was the Brahmin hunger appeased.

So replete with smoke, Sanskrit and sambar, I emerged, recharged and re-Iyerised.
Email Post 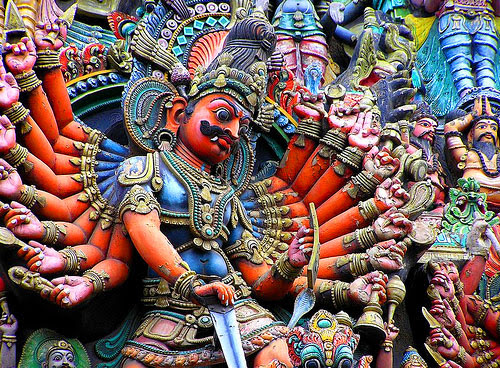